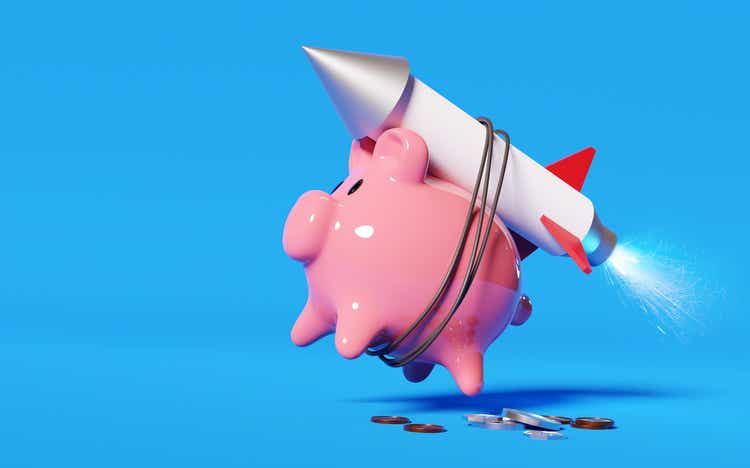 Over the next two years, MercadoLibre, Inc. (MELI) is expected to experience breakthroughs in revenue growth at a CAGR of 33.08%, with a slight moderation from growth during the COVID-19 pandemic. At the same time, the company is poised to post massive net profit profitability, reaping the gains after aggressive investments in its logistics, SG&A and Research & Development assets.

Going forward, we expect MELI to experience sustained market share gains in its e-commerce and fintech services as one of the market leaders in the region.

Over the past five years, MELI has experienced excellent revenue growth at a CAGR of 52.96%. The company had a bumper year in fiscal 2021 despite global supply chain issues, reporting revenue of $7.06 billion with year-over-year growth of 77.9%. MELI also improved its gross profit margins to 40% in FQ4’21 from 36.8% in FQ4’20. Given MELI’s aggressive expansion into multiple segments, it has yet to report sustained profitability in recent years. However, the company bucked the trend in fiscal 2021 with $83.3 million in net income and 6.4% operating margins. This is an impressive improvement from 3.2% in fiscal 2020 and -6.7% from fiscal 2019.

Over the past two years, MELI has grown revenue through its fintech and commerce segments, at a remarkable CAGR of 68.87% and 89.18%, respectively. Although growth can be partially attributed to the COVID-19 pandemic in fiscal 2020, the company managed to maintain its expansion, despite the pace of reopening and global supply chain issues during fiscal 2021. Its growth is also evident in its gross merchandise volume (GMV), which more than doubled from $3.87 billion in FQ4’19 to $7.96 billion in FQ4’21. Its unique active members also grew at a CAGR of 36.37% during this period.

Gross volume of goods and active users of MELI

Additionally, we have seen an increase in spend per user from $87.55 at FQ4’19 to $96.83 at FQ4’21, representing a 10.5% increase over the past two years. In its recent earnings call, MELI also reported that shoppers are buying more with a 17% year-over-year increase. It represented increases of more than 50% compared to the pre-pandemic period, despite the reopening of physical stores in the region. MELI’s improved metrics demonstrate the continued adoption of digital commerce in Latin America, paving the way for its long-term growth.

By offering free shipping for over 80% of its GMV, MELI has definitely seen an improvement in user engagement on its platform. Additionally, the company has improved its delivery speed, buyer protection, customer service, loyalty program and expanded the products it offers in its market. As a result, more than 60% of its GMV is based on organic sales on its online platform, setting itself apart as a world leader in e-commerce.

Penetration of the network managed by Mercado Envios

Mercado Envios also reported an improvement in managed network penetration to 89% at FQ4’21 from 77% at FQ4’20. This represents a 16.2% year-over-year improvement. Additionally, the logistics segment managed to ship over 275.9 million items with a 29% year-over-year volume increase during the fourth quarter of 2021, with over 59% same-day or next-day delivery. next day and nearly 80% within 48 hours of purchase. Despite the generally busy holiday season, MELI has also improved its logistics networks through lower average shipping costs and improved delivery speed.

MELI also reported improved capacities and service levels in its distribution centers with delivery time reduced to less than 24 hours during the fourth quarter of 2021. The scaling up of its warehousing operations has far improved its productivity and the profitability of its logistics, compared to FQ3’21. As a result, we expect improved margins from its operations going forward, contributing directly to its gross profit margins and net profit profitability.

For fiscal 2021, MELI recorded exemplary growth for its payments business at 78% year-over-year with $77.4 billion in total payment volume (TPV) on a currency-neutral basis. In the fourth quarter of 2021, MELI recorded a 56.1% year-on-year increase to reach 1.02 billion online transactions on its platform, with a total of $24.2 billion in sales at a growth of 72, 8% YoY on a currency neutral basis. Off-platform POS also outperformed accounting for the bulk of its revenue at 62%, with $48 billion in sales in fiscal 2021, representing an impressive 97% year-over-year increase on a neutral basis. in currencies. In Q4 2021, its off-platform POS grew 96.5% year-over-year to $16.1 billion, with a 69.4% year-on-year increase to 849.9 million off-premises transactions. platform.

These impressive figures underscored the fact that online commerce and payments are gaining strength in the region, lending credibility to the aggressive expansions of MELI and the acquisition of Redelcom so far. On a currency-neutral basis, digital POS accounts, including wallet payments, P2P transfers and card transactions, grew 138.3% year-on-year to $7.1 billion. Its unique fintech active users also reached 34.5 million, representing impressive increases of 9.1% QoQ and 22.7% YoY.

Additionally, MELI finally entered the cryptocurrency market in November 2021, allowing its customers to invest through their digital accounts. Although cryptocurrency adoption is still in its infancy in the region, we expect exponential growth once the decentralized system gains popularity after the war in Ukraine. It’s only a matter of time before MELI facilitates e-commerce transactions through cryptocurrency, which proved crucial during the “collapse” of the Russian currency through multiple sanctions. against its economy.

So, is MELI Stock a buysell or keep?

MELI is expected to report a slight deceleration in revenue growth to a CAGR of 33.08% over the next two years. However, we simply view it as a moderation from the forward growth experienced during the COVID-19 pandemic in fiscal years 2020 and 2021. For fiscal year 2022, the consensus estimates that MELI will register revenues of 9 .61 billion, which represents an impressive increase of 35.9% year-over-year.

Additionally, the company is expected to record impressive net profit growth at a CAGR of 65.9% over the next two years. For fiscal year 2022, consensus estimates that MELI could report net income of $418.2 million, representing an exceptional 502% year-over-year increase. Additionally, the company is expected to reach net profitability of $1.151 billion by fiscal 2024, which is hugely impressive given Shopify’s (SHOP) pessimistic post-pandemic outlook.

MELI is currently trading at an EV/NTM turnover of 5.15x, below its 3-year average of 11.65x. Due to its impressive performance and undervaluation, consensus estimates also rank MELI’s stock as attractive now. Given the recent market correction, MELI is also trading at $957.87, closer to its 52-week low of $858.99. Its valuation has also “almost” returned to a more neutral pre-pandemic level, providing a great entry for those who have yet to buy. Therefore, we encourage interested investors to take advantage of this opportunity to gain further exposure.

Therefore, we evaluate the MELI stock as a buy.

What Happens When Auto Finance Falls Through