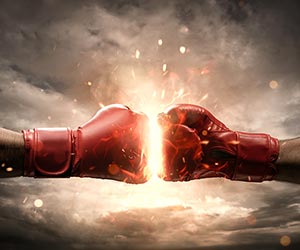 Do traditional institutions still have a chance to win the banking war?

Instinctively, being called a “progressive bank” just sounds more appealing than being known as a “traditional bank”. You would think that the more traditional financial institutions would all want to transform into progressive institutions.

Ultimately, however, the labels don’t matter. It’s the actions that count.

A winning approach is less about fitting into a particular financial institution category and more about serving clients the best you can, says Kate Drew, director of research, CCG Consulting. For some financial institutions, this means staying well ahead of the curve while others do better by taking a wait-and-see approach.

This does not mean, however, that ignorance is bliss. “Whether you call yourself progressive or traditional, you need to understand where the industry leaders are heading and how that could impact your business and your future plans,” says Drew.

It’s one thing to fall behind due to budget or even security concerns, she says, but it’s another to not just focus on the right areas.

If your financial institution is still spending time strengthening its online banking services while your competition is implementing advanced mobile banking tools, you’ve got a problem.

At this point, all financial institutions should recognize the obvious trend and focus on delivering seamless, device-independent customer experiences.

In a report, the company classified financial institutions as traditional or progressive banks, based on a few criteria. To be considered progressive – which represented 30% of respondents – an institution must acquire less than 50% of its technology from a single vendor, work with fintechs as part of its strategy, and have made at least one fintech investment. .

Based on the survey results, the most important differences between forward-thinking banks and those that take a more traditional approach are as follows:

( Read more: The rise of the hybrid consumer in banking (and why it matters))

5 ways to optimize data and reporting for budgeting and planning

To streamline planning – and deliver valuable information that can drive vital business decisions in an uncertain environment – you’ll need to access and report on key data in a timely manner.

Looking at specific retail products and support features, the survey found that several products, including bill payment, budgeting tools, P2P payments, and chatbot support, are offered in similar percentages between progressive and traditional banks. In other areas, however, progressive banks are clearly ahead of the pack. For example: account aggregation, expense analysis, mobile check deposit, and free credit reports. 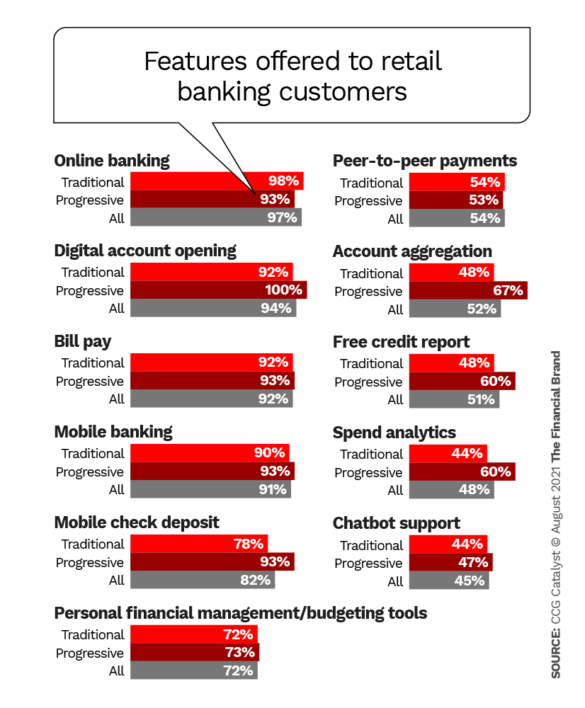 SME banking: the battleground ahead
Due to their generally more complex relationships and tighter due diligence, business banking tends to lag behind digital retail banking. CCG Catalyst predicts that digital integration for business customers – including small and medium enterprises (SMBs) – will become a battleground as customers, who got a taste of digital lending with Loans Protection Program paychecks (PPP), want to keep applying for and close loans digitally.

Progressive banks are far more focused than their more traditional counterparts on finding the right customer in the right way. As digital banking eliminates geographic boundaries, financial institutions can define their customer base based on segmentation criteria other than physical proximity, such as occupation, ethnicity, or ownership. 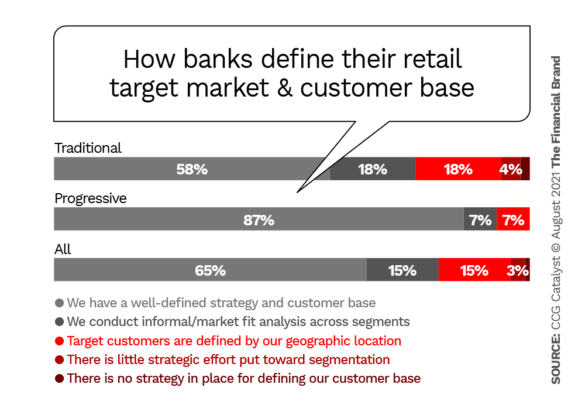 All institutions, progressive or traditional, have been slow to adopt the agile product development methodology common to fintechs.

While progressive institutions do a good job at customer segmentation, they have more work to do to launch products quickly.

Only 13% of banks in total (14% of progressives and 9% of traditional) believe they are behind when it comes to technology and innovation. In reality, they’re probably later than they think they are, argues Kate Drew, but it’s more nuanced than simple denial.

Take the API preparation. Traditional banks say they are more prepared to use application programming interfaces. But that could be because they define API prep differently from progressive banks, or they just don’t think it’s a big deal.

While it is true that many banks have used APIs internally for years, the ability to leverage APIs with third parties to deliver the best services is a different animal that requires a more flexible technology infrastructure. And progressive banks come to API with a stronger foundation than traditional banks.

Not on the same page:

Three-quarters of progressive banks report having full access and control over data within their organization, compared to only half of traditional institutions.

“Progressive institutions recognize that taking a true API-first approach is a big push,” notes Drew. “Traditional institutions may operate with a narrower view of IPA readiness and may not fully absorb the direction the industry is taking. “

CCG Catalyst tip for them: Review what an API-enabled infrastructure means for their bank.

Do progressive banks view traditional banks as prey? That’s what Paul Schaus, founder and CEO of CCG Catalyst thinks. He envisions a future where progressives slowly but surely acquire more traditional institutions. “As the number of progressive institutions increases, the industry will likely advance in the same way that a rising tide lifts all boats,” said Schaus.

The tides change twice a day, but Schaus predicts that the transformation into a largely progressive financial services industry won’t happen as quickly. “This walk will be slow and will take time,” he said. Of course, this will not happen in a vacuum. As the banking sector transforms, non-banking competition will only become more widespread.

4 pitfalls for fundraising (and better options)